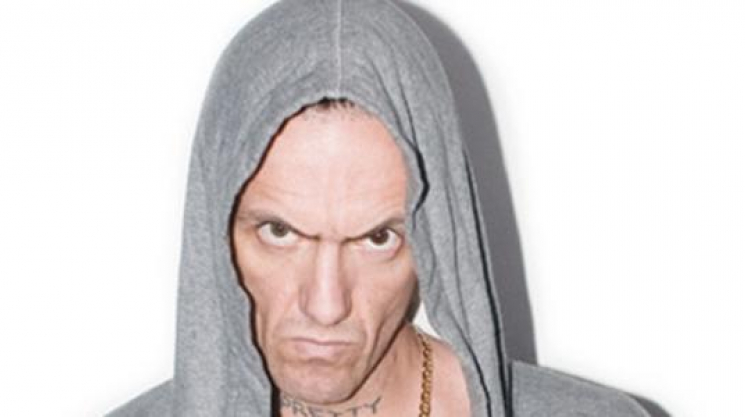 On the cover this month are Ninja and Yo-Landi Vi$$er of Die Antwoord. This high energy, rave rap outfit from South Africa caused the internet to explode back in February when two videos they made, “Zef Side” and “Enter The Ninja,” spread like tuberculosis. The virus analogies can’t stop there as everything about Die Antwoord is totally infectious, be it the music, the tattoos, the hair, the Zef style, or the Afrikaans slang. Given that Die Antwoord translates from Afrikaans to The Answer, it begs one to ask: what’s the question? Probably something along the lines of, “Are these two for fokken real?” After photographing and talking to them as well as seeing their ridiculously awesome live show (their first ever in Canada), we’d have to emphatically say yes!

The video “Zef Side” went online in December 2009 and the video for “Enter the Ninja” was up in mid-January 2010. How did they fare initially?
Ninja: No one watched them and we started getting insecure and we thought we sucked.
Yo-Landi: A weird thing was, suddenly a lot of people caught on to “Zef Side” and we were a little tweaked because we made it for fun. But “Enter the Ninja” was more like our soul. From there, funny enough, “Zef Side” turned people on to “Enter The Ninja.” And that became the big deal.

Please explain what Zef is.
Ninja: It’s the ultimate style.

February 3, 2010 is the day the videos went everywhere. What was that day like for you?
Yo-Landi: It was messed up.
Ninja: It was nighttime. We got home at night after a show, late. We came in from Johannesburg. It was like The Twilight Zone for about a week.

Did you leave your computer that week?
Ninja: We just left to go to the bathroom and then came back. Or when the food ran out after the third day. We just laid down on the floor and looked at the sky and then went and looked at the computer again.
Yo-Landi: When you have like 5,000 emails in your inbox you just give up eventually. I didn’t know what to do.
Ninja: When you’d navigate away and come back there was like 2,000 more hits. Once it jumped up 10,000 hits in a second. It was a fokken freak out.

So literally over two million people have seen you shaking your dick in the “Zef Side” video?
Ninja: It’s much bigger. Someone posted another one so it’s actually like four million. There’s two there. It’s ridiculous.

After the explosion in early February, what happened next for you guys?
Ninja: It’s all a psychedelic blur. Everyone wanted to be our friend.
Yo-Landi: We went from a small fishing village in South Africa to flying business class to LA.

Is it fair to say Die Antwoord is satire?
Ninja: Not really. I think it’s just kind of new. A lot of people say that but it’s not really our thing. It’s very personal to us. It’s just how we are. We’ve done other stuff before but I didn’t really know what my fokken zone was. Then when it hit me with Die Antwoord it was like, “This is the fokken shit. We can go full-force into this.” It’s new. People get it and they love it. But some people are cozy with the shit state of pop at the moment and they can’t process it and think it’s not real. They’re not into the next dimension yet and are kind of stuck in the past. How old are you?

I’m 31. How old are you guys?
Ninja: I’m 35 and she doesn’t talk about her age. I’ve been doing other projects for a fokken long time.

I’ve heard you say Die Antwoord is an overnight success that was 20 years in the making.
Ninja: I’ve been rapping for ages. When rap came out it was so fokken fierce. There was nothing quite like it, but then rap kind of died. It’s huge but it’s this big fokken dead thing, to be perfectly honest. It was so fierce and psychedelic and had so many different things popping. It started getting big and overtook Garth Brooks in the late Nineties. It was like, “Jesus, rap’s bigger than country.” Now it’s not such a big thing. It’s big but it’s dead. I was experimenting with all this different shit that was way off the fokken mark. It wasn’t close to the core. Then you find something like this. Die Antwoord? It’s fokken personal, Die Antwoord is.

Why do you think Die Antwoord has resonated with people on a global level?
Ninja: Because it’s new.

What was the reaction to you in South Africa?
Yo-Landi: Mixed emotions. Because it’s the place we come from our music means something totally different to someone from South Africa. It’s got different nuances and they hear different things to what you hear. The kids love it. The older people aren’t that sure.
Ninja: A lot of old people really, really, really don’t like it. I’m not bragging but we’re the biggest group in the world ever out of South Africa. Like ever, in the history of the whole fucker. There’s Mandela, District 9 and Die Antwoord. That’s the history of South Africa. Someone said that to me and I’m like, “Oh yeah, that’s true.” The style we represent pisses a lot of people off. South Africans generally, the culture—this is gonna be a little controversial what I’m going to say here—the entire culture is insecure a little bit. Americans, they’re not insecure. You’ll see the French also and they’re like, “Fuck everyone; we’re the centre of the world.” We’re kind of inspired by that attitude. There’s cool fokken shit in South Africa. But the people, as a culture, as a whole, they haven’t got a fokken style. Then we check in and we get to present it and stylize it with full-force. And that’s what Zef is for us—that ultimate flex and it’s fokken South African. It’s a medium to put our most intense life experience and energy into like a bomb, which is Die Antwoord.

You mentioned District 9. Is it true the director of that, Vancouverite Neill Blomkamp is going to make your next video?
I can’t believe it. Neill: Fuck you. He was supposed to come tonight. He said “no” right before we came. He thought the show was at 7:30 on the 17th. So he missed it. We’re gonna do something with him but he’s caught up and doing a new film. We’re not sure what it is but probably a video. I haven’t met him yet. We’re looking forward to meeting him. He’s a genius.

Yo-Landi, can you confirm that you’re talking to David Fincher about playing Lisbeth in the English version of The Girl With The Dragon Tattoo?
Yo-Landi: He asked me and I said no. We’re shooting a feature film now so the plan didn’t work out. He wanted to shoot in August but we’re in Japan and then we’re shooting our movie.

What’s that called?
Yo-Landi: The Answer.

And it’s about you guys?
Yo-Landi: Yeah.

Die Antwoord have this amazing internet presence. However, you’ve signed with a big label, Interscope, and big labels are notoriously bad at the internet…
Ninja: It’s like a gangster move. We have a very unique deal.
Yo-Landi: I don’t understand.

What I mean is big labels just aren’t good at the internet… especially on YouTube. A lot of the time, efforts to monetize online traffic can end up hurting the artist.
Ninja: That’s why we’re with Interscope. They don’t restrict us at all. Every single fokken major was knocking on our door. We had a real affection with Interscope, like an understanding. We got an intimate understanding and that’s really fokken important to us.
Yo-Landi: They’ve got Wat Pomp. They’ve got fuck you. They put out fokken Tupac. They put out fokken Eminem. They put out Dr. Dre. All these fokken people. You walk into their office and there’s Eminem’s album, fokken Marshall Mathers platinum.
Ninja: They’ve broke a lot of things. The worst thing they can do is restrict. As for the interweb, I can do so much. But when you take it to another level, we make pop music. I want to hit different people. The cool thing is our contract is unique and we have a fort around what we do. In the past you get bands like Queen and The Rolling Stones or Michael Jackson. I don’t think the labels were restricting them. I don’t think they were telling them what to do because they were popping. So the thing is stay popping and you’re gonna get more people plugging into this mechanism.

What’s the coolest thing your newfound notoriety has allowed you to do?
Ninja: Get paid.

And what’s the master plan to keep people talking about Die Antwoord for years to come?
Ninja: I don’t know. We don’t think about that. The future is boring. I don’t care. I never worried about that before and I’m not going to start worrying about that now. 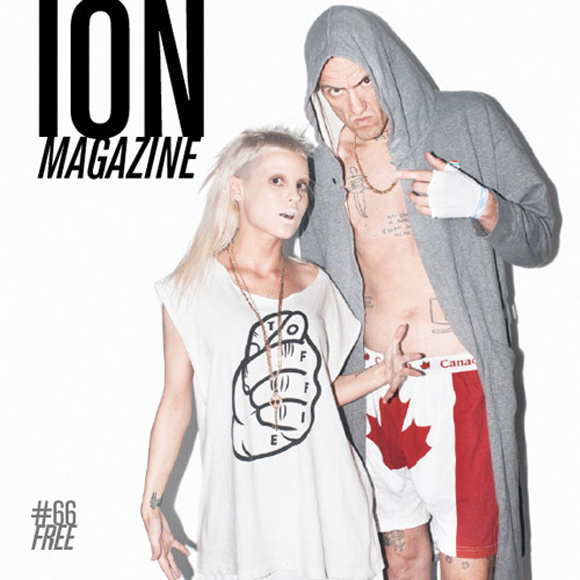 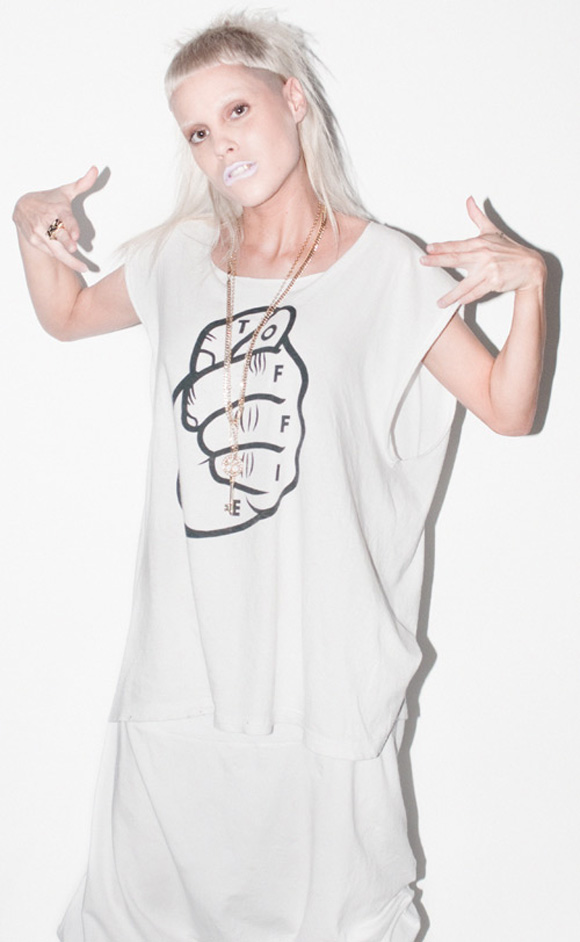 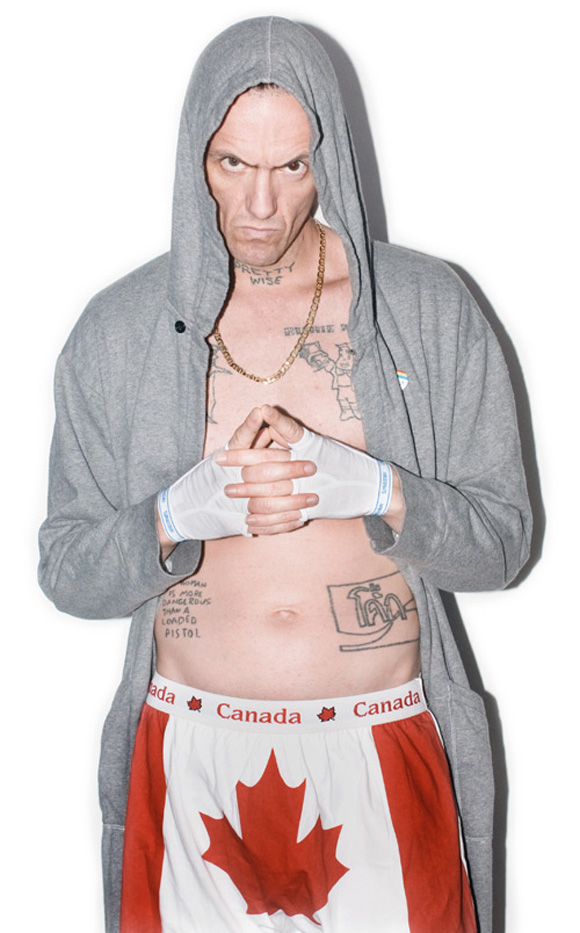 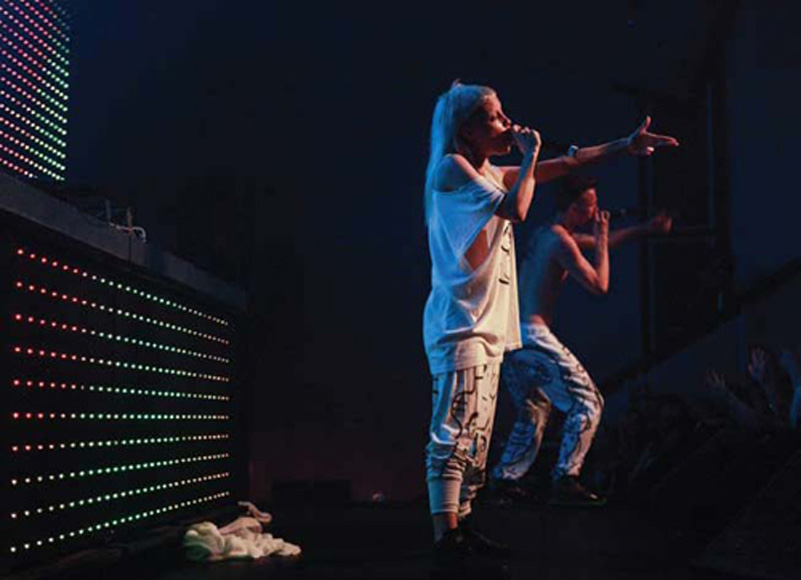 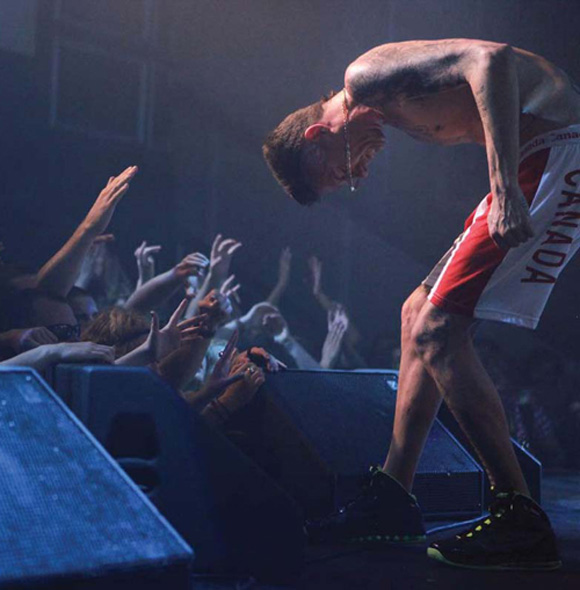 Die Antwoord is a band living in a fantasy world thinking they represent the "grassroots level" of SA culture. What a bunch of bull! They represent a minority of a minority on the Cape flats and that's that. If they are truely saying what we as South Africans feel and think, then please tell me why they are not that popular in their own country? Why do they need to travel the world and perform internationally but they've hardly had any proper performances on home soil? Perhaps it is because they know that most South Africans would not go watch a show where there's a constant barrage of swearing and the breaking down of Cultural standards. Sure, you can be who you are, act how you want to and saw whatever comes to your mind, but don't go selling lies to the world about what you think my culture is like on "grassroots level".