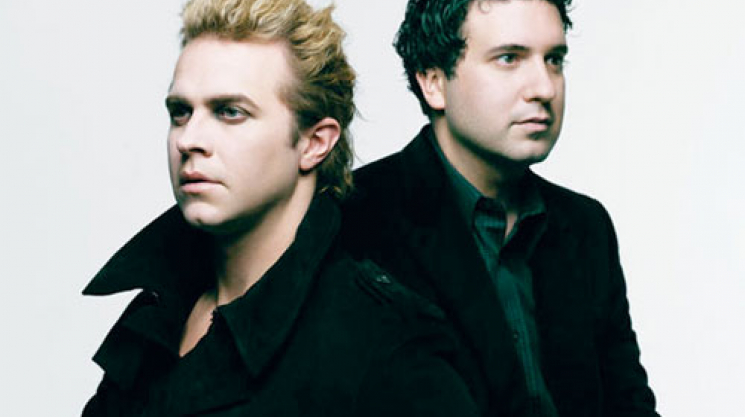 Regrettably, I didn’t ask Casey Spooner if he’s wearing a wig in the video for Fischerspooner’s “Just Let Go.” The lead track from the duo’s new album, Odyssey, is a surprisingly beefy number and the video even features humans from earth treating acoustic instruments such as the guitar and the drums with apparent expertise. I thought this might be joke, albeit one that my tiny west coast brain didn’t really get, especially in light of Warren Fischer’s past comments concerning the unwelcome elements of analogue recording that otherwise besmirch his perfectly glacial and hermetic digital sound world.

But no – as you will learn later, Fischerspooner has recovered from the severe OCD that was once required when producing music in an air lock, while the more theatrical half of the team seems to have thrown as much effort, if not more, into the making of Odyssey as he conventionally would into the making of the wigged-out live spectacle.

This brings us to the burning issue at the heart of Fischerspooner. If you’re anything like me – straight, male, full of hate – then this New York minted extravaganza made you spit-take your Hi-Test all over the toddler when you first saw it camping it up on any number of Late Night TV programs, to the admittedly swish-tastic sounds of “Emerge.” But my God – the costumes, the faggotry, the queasy earnestness of modern dance – Fischerspooner’s greatest achievement back in 2000 was not the adrenaline it injected into a moribund and uniform electro scene, it was making an entire continent of heterosexual men nervous and twitchy. Five years later, the duo has beat the odds with a second album that improves dramatically on the first, and has survived a half-decade of flamboyancy and the biblical excesses of its art-world-on-Broadway ambitions to arrive at the highest peak of its career so far: talking to me.

Casey Spooner comes off as a little unimpressed at first, having said that. On the other hand, he used to include the late Susan Sontag in his social circle. They went to see Björk together and she wrote the lyrics to one of Odyssey’s high points, “We Need a War.” I’ve been to Disneyland and I told a guy in a wheelchair to fuck off once. So, I would be unimpressed too, sinking from “Illness as Metaphor” to guy who hates cripples and writes for ION.

Even more disconcerting though is Spooner’s slightly petulant tone, especially when I point out that rock bands such as Kiss, for instance, would never humiliate themselves with make-up and costumes. Perhaps we got off on the wrong foot, then – a situation I might have rectified if I’d thought to ask about his hair, which has gone from suspiciously thin in the Electronic Press Kit to enormous in the new video. But I didn’t, as I only perform research after the interview, like any drug addict.

How did you get Susan Sontag to collaborate with you?
Spooner: It was her idea. She just said to me once in passing she knew I was in a band and she was like, “Oh God I’ve always wanted to write a song.”

Talk about the difficulties making Odyssey.
Well the first record – we didn’t even know we were making a record. We had no financial support from anyone so we could only work when we could afford it or when we had the time, apart from having to pay the rent, so… That sort of made the working process a little bit more sporadic and so this one was much more concentrated and much more intense.

Did you fight?
It was very tense. Cliches are true for a reason, and a second album is a bitch. Do it again, do it better, do it faster… do it in less time.

Did you find yourself accepting things that you wouldn’t have before?
I had to accept things before that weren’t ideal, are you kidding? I would beg, borrow and steal to get a show done before and there would be times where I would open up a box of wardrobe and I would be, like, oh well… You know what I mean?

No! What’s the defining moment of Fischerspooner’s career, so far?
There have been so many – I mean to perform on Top of the Pops! To perform with Kylie on Top of the Pops! We did a big show in Los Angeles in 2001 – that was a pivotal moment. That show was amazing but it was riddled with difficulty and basically I had a complete mental collapse at the end of it and quit and dissolved Fischerspooner. It cost hundreds of thousands of dollars and I came home with 20 dollars, no bank account, no apartment. I was famous and destitute.

I’ve seen you described as “sincere kitsch.” What do you think of that?
I wanted to be able to be a serious artist that could respond to American culture. And that is a weird combo and I guess it represents how schizophrenic I am. My parents wish I would just be a painter. But I feel like I’m going through some sort of artistic, shamanistic, cultural rite of passage… I like elements of pop culture – it has a potential to be interesting, and that’s the struggle, to work within it and yet introduce something more complicated and interesting. I know that whenever I saw anything that had that kind of twist to it when I was a kid – it caught my attention.

Like what?
Like seeing Laurie Anderson perform on Saturday Night Live. That was really mind blowing. I guess in a weird way I’m trying to take the avant-garde to the mainstream… It’s interesting to have that choice before me. It’s the difference between being Yo Yo Ma and Ashlee Simpson.

Wouldn’t it be awesome to be a combination of both?
Yeah – see now that’s what I’m talking about! Not Ashlee though – she doesn’t even represent, like, good bad pop… We need a new Madonna. I feel like we’ve lost our icons. I guess Beyoncé. Beyoncé and Yo Yo Ma.

There’s been a terrible flood of sub par icons in the last ten years.
I know – what happened?

They started marketing to kids. That’s what happened.
Right.

We went on to discuss a shared love of Neil Diamond, Roxy Music and Spooner’s favourite “Emerge” remix, which is the “Smells Like Teen Spirit” mash-up. I’d love to report that, having gotten to the bottom of Fischerspooner’s hollow dog and pony show, Spooner hissed some vile curses down the phone at me and my head fell off, but it didn’t happen. Perhaps if the new album wasn’t so convincing, we’d have something to fight over, but Spooner, far from being the dilettante I was expecting, is actually in command of this extraordinary “behemoth” as he calls it. “Just Let Go,” indeed. In conclusion then: it’s a wig. But a good one.