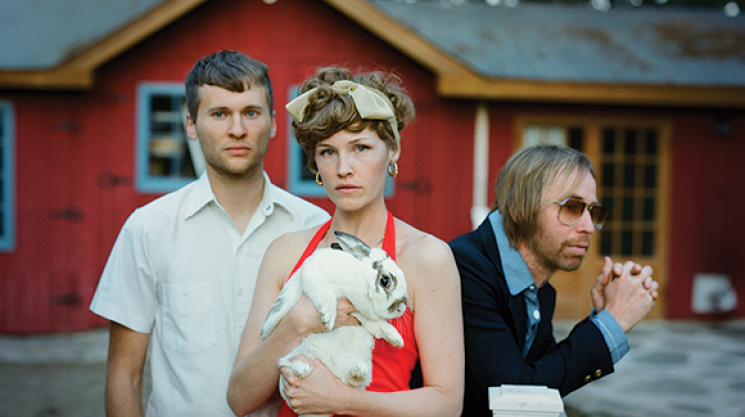 Music Go Music are a pop music band from California that will send you in a time machine right back to the 1970’s world of the Bee Gees and ABBA. David and Meredith Metcalf and Adam Siegel are a band from a different era, though, which don’t see those as being kitschy pieces of 1970’s pop culture. Like most modern day musicians, they were influenced by rock bands that were largely created as a backlash to that mainstream radio sound of the seventies, but now they have been able to revisit those sounds and themes, decades removed, and ultimately find common ground to create catchy, jive-filled pop songs. Michael Unger interviews David Metcalf from the band and finds out that, just like the Bee Gees, they have their own stage musical aspirations, and that playing on a cruise ship is not as easy as it looks on the Love Boat.

Your new albums, Impressions, came out on August 19—what can you tell us about it and how this records differs from the first album?
We tend to write songs about romantic successes or romantic failures, which is similar in respect to themes of the first record. Because of everyone’s schedules, this album took longer to make and we would record songs here and there. I’m a little too close to it to be able to say how that affected the record. But we have the same process—the three of us would write the music together, then I would go off to write lyrics. So our process was fairly similar to the previous one.

You released a couple of EP’s after the first record—was there a particular reason why you were ready for a second album?
Our first album was actually made up of songs that originally came out on EPs. We intended to release songs in small batches as we finished them. We felt that this band was more of a “singles” band, in kind of a perverse way, it seemed like a good way to put stuff out in the world. We joke about how all the songs are supposed to be “A-sides.” With this record we had the record done before we were ready to put songs out to the public. We still think of it the same way.

Your sound has been compared to ABBA, The Carpenters, and other sounds of the seventies. Have there been any other influences that have come in since you’ve started the band?
We have always tried to write catchy poppy songs, so it just happened to sound that way... we’ve never really thought about it too much. When we made the first record, I personally knew nothing about ABBA, or disco music, but as we released and toured, we became more exposed to it in the aftermath. I like a lot of that stuff now, like Giorgio Moroder, and I like the Bee Gees a lot. The thing with the Bee Gees though is that they are a band that is better to listen to in small doses, if you listen to a whole Bee Gees record, it starts to get tiresome, but they’re one of my favourite groups.

With two albums and a couple EP’s now under your belt, where do you see yourselves three or four years down the road?
It’s really hard to plan these things, but when we recorded the first album, we really wanted to play on a cruise ship. So we put the word out there, and seriously looked into it. After we contacted people and went back and forth, we realized that we’d have to sign contracts for a minimum of nine months. We just couldn’t swing that; you have to really live a sort of drifter, nomadic existence if you want to do that. There are these one off cruise groups that will have rock groups play on them, but we wanted to be on a regular cruise with regular cruise people, and not people going to see a concert.

We have a few other projects on the go—we’ve written this musical that is always in various stages of completion. We’re hoping to get that made, but it’s hard to get money for that sort of thing, it may end up just being a new record. But the challenges of putting together a staged musical really interests me, so hopefully things will come together to make that happen.

Let’s hope they do! A Music Go Music musical… now that’s something we want to see.