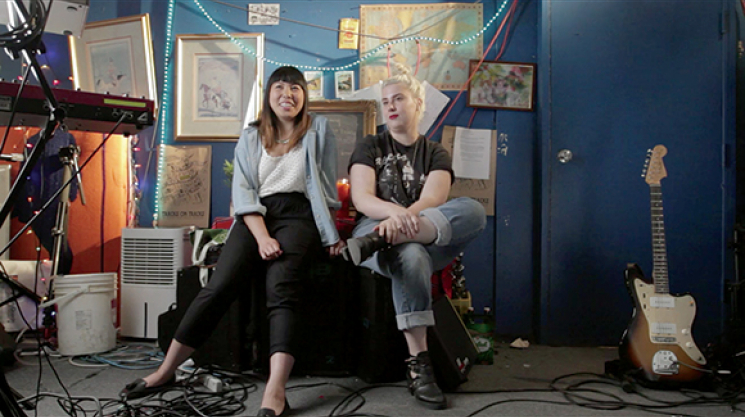 The Belle Game are rising stars, not only in Canada, but around the world. Their debut album Ritual Tradition Habit has received praise from critics and fans since its release. Andrea Lo fills us in on the band's (ahem)... habits.

What role does your city play in your music? Does a community support you, or do you daydream about contributing to another city's output?
Vancouver is home to Adam, Alex, and I (Andrea). We had all our quintessential awkward 'growing up' moments here, so it's hard for it not to influence our music is some sort of way. It's a very supportive city, no one's out for blood, and oddly enough everyone just wants to see everyone succeed, so we can grow the scene! As if that wasn't good enough already, I still manage to daydream about contributing to another city's output—what musician wouldn't love expand their reach!

What was your tipping point where you finally thought, "I'm going to make a go at this?" Was it a record someone gave you, or maybe an inspiring show?
I think for myself, it was pretty recent; I’m talking September 2013. We had hit a bit of a stale point in our career and all of a sudden, like the world works sometimes, we were hit by a bunch of great opportunities; first time playing tour dates in the States; first time touring Europe; first time on a full US tour. Not to say that all moments were a high, and that every show was packed (we definitely had our lows), but all these events were a huge step forward, and there was no way I could not feel charged about making 'a go' at music after all that momentum.

Ever forgotten what you were playing/singing on stage? How did you handle it?
Oh yeah. No doubt about that. I usually recognize that I’ve forgotten something ahead of time, so I do my best in between breaths to whirr through the song lyrics in hopes that I'll remember. And, if I not, I just pull the good ol' card of repeating a line. Have to do something!

What's your band's inside joke?
We all have our individual quirks and shortcomings, which usually come in the form of "catchphrases." Then we make fun of each other in front each other—or behind—each other’s backs.

How do you decide what to wear onstage? Do you have to go through the undignified discussion of talking to band mates the day before, or do you just all surprise each other?
I think we all have an idea of how we want to be represented as a whole on stage, so it usually works out without having to say anything. I just wear the same thing every time. Makes for no complications and a smaller piece of luggage!

What can you not leave to go on tour without?
Wallet. Phone. Keys.

Grolsch Premium Lager + ION Magazine present Grolsch Originals, a series supporting talent from across Canada. In the last instalment for the year, Andrea Lo and Katrina Jones of the hypnotic dark pop group The Belle Game sit down to talk about pushing themselves musically, their idea of success, and the memorable advice they received from Broken Social Scene’s Kevin Drew.