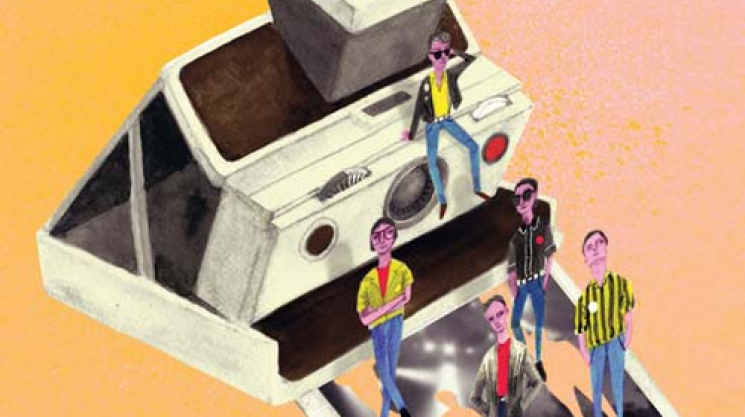 The Pointed Sticks, though only in existence from 1978 to 1981, played alongside DOA, Devo, Avengers, Dishrags, Buzzcocks, toured in the States, pressed four highly acclaimed 45s, performed in Dennis Hopper’s cult classic Out of the Blue and eventually became the first Canadian band to be signed to England’s Stiff Records. They blew up quick, in more ways than one. When Stiff decided to go with producer Nigel Gray over Bob Rock, the sessions flopped. The Sticks retreated back to Vancouver to record their LP, Perfect Youth—an album so melodically unrivalled it remains the epitome of Canadian power-punk—but by the time it was released, the band had disintegrated.

Today, after three decades of near silence, The Sticks have reunited with the original lineup of Nick Jones, Billy Napier-Hemy, Tony Barbach, Ian Tiles and Gord Nicholl to make their second official studio LP, Three Lefts Make A Right. And the songs are fucking good. It’s hard to believe that these men could make the perfect follow-up to an album they recorded as boys without skipping a beat. Only difference is that this time, they aren’t singing about girls.

What’s the one thing you want to ask a newly reunited punk band from the Seventies about? The past. But you force yourself not to because you don’t want to imply that you have less faith in their future. And sometimes you just say ‘fuck it’ and ask anyway. Subtly. You know the stories will be worth it.

What did it feel like blowing up on a mainstream level as an underground band in the 1970s?
Tony: It was a lot of pressure. It became a little bit… not fun. We got together, kind of, as a joke band, you know, to take the piss out the scene. And at the same time, we wrote a bunch of songs and they were really poppy and hooky. We had a good time, but as we became more and more popular we kind of became the antithesis of
ourselves. And I don’t think any of us realized that at the time.

What makes a good song?
Tony: When it recalls things but doesn’t remind me of anything specific. You can sit there and toil over a song, but the more you toil the worse it gets. It’s not like a poem. The best songs are immediate.

I like that answer. What was it like working with Dennis Hopper?
Tony: He was a regular person, a stoner, drinking a lot. He offered us five grand to play in the movie so we said “cool” and went down to meet him. We get there and he’s drunk. Nick asked him for a script and he said, “There’s no script. It’s all in my noggin.”

I want to know how the band began.
Tony: Nick had been living in England, working at a record store. I think this was in 1977. So, he saw a lot of the bands then, Buzzcocks and everybody, and by the time he was ready to go come back to Vancouver all he wanted to do was make a band. Nick and Bill started goofing around. They knew me as the bass player from Victorian Pork, and asked me to join. The drummer [they got] was horrible, Ernie Dick. He didn’t know how to play to the drums. So, he was replaced by Jerry Berrick, but Jerry didn’t work out either. [Laughs] I don’t think he made it past one practice. So I brought in Ian. He had been singing in Victorian Pork, but he also knew how to drum. Then, Gord later on keys. We probably would have put him in the band even if he couldn’t play an instrument. The other day, I was talking to my daughter about getting a band together. I told her, “You’re almost better off to choose who you want in your band, then ask them if they can play”.
(At this point, Ian shows up.)
Tony: We were just talking about how you ended up in the band, because you could actually play.
Ian: Not really. I played “Police and Thieves” remember? I sat down— you guys had Ernie Dick at the practice—you guys took a break, I played one song, then I split to San Francisco.

Why?
Ian: I was down there to see the Avengers and I came back to Vancouver to play the gig with Pointed Sticks and DOA. I hitchhiked back with Craig [Gray] from Negative Trend. The only money we had was his singles. And the first record store we went into the guy bought all of them. So we had a few bucks to get home.

How did you two meet each other?
Ian: Tony and I met in Ottawa in ‘75 through a girl, Janet.

A love triangle?
Ian: No, they all thought that we were gay. Remember how they thought we were gay?
Tony: Especially when we brought Lincoln.
Ian: Lincoln, that crazy-ass guy. [Laughs] The reason I came to Vancouver was because of Tony—to get in a band because I had been turned on to the English scene and I thought “I can’t do this in my home town.”

What do you think about the way that the internet has completely changed the way music is distributed and discovered? I mean, you guys had to trade by mail or word of mouth.
Ian: To me, the question that begs is, is the live experience of playing for an audience more valuable or less valuable now? Because it’s tougher, less availability, less money, less clubs… so does that make it more important for us to get out there?
Tony: We’re losing touch with that physical thing. I think that the record store is the epicentre of any music scene and that is changing.
Ian: The guy behind the counter adds up to all the music bloggers out there together. He knows everything. All these guys are eccentric people. They’d make more money doing other things, no doubt about it, but they care. I think it’s incumbent upon the bands to care too.