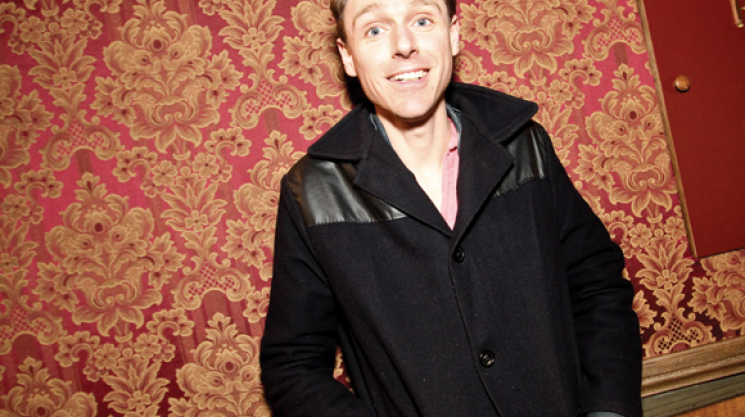 On a rare clear afternoon in Vancouver, Joel Plaskett is calm while walking through the large theatre he’s about to sound check in. Carrying his guitar, and wearing a tucked in, pink button up shirt, he projects his Maritime charm immediately without having said anything yet. “Hi! I’m Joel!” he exclaims once he opens his grinning mouth without even knowing what I’m there for or if I should even be intruding on his preparation.

It’s that type of polite assuredness that Canadians are known for, and what makes Joel Plaskett the ideal representation of “True Patriot Love.” Giving an acknowledging wave to his staff and band mates, The Emergency, and shooting me a buddy nod, he leads me to the basement of the theatre where we do some heavy couching and get down to the business of what it’s like to be a cheeky Neil Young nerd.

Joel Plaskett’s latest effort Scrappy Happiness, might end up being viewed as his defining album, not because it’s a cross section of his career output, but because it’s so distinctly “Joel Plaskett”. The blueprint for it was to record a song every week for ten weeks and release it to the CBC. For an artist like Joel who has included “happy accidents” on many of his records, and recorded several different takes on his own work, a necessary attitude of accepting a product as “finished” is indicative of his career-long work ethic.

“It’s for somebody else to decide whether or not the end result suffers from the deadline, but for me it was an interesting way to make music. And kind of satisfying, because it was just out, and from a pure energy level being like ‘Cool. That’s a version of a song,’ and then you take it to the stage and it changes nightly,” says Plaskett. He then adds, “All the stuff we talk about that’s great about Neil Young or Dylan or even to a certain extent Led Zeppelin, who I’m sure toiled over some moments; they were recording fast and furious between tours and shit, y’know? A lot of the bands we admire didn’t have time to review for months.”

Canada is the most difficult country to tour. The driving is exhausting, with the next city generally being so far away that the wake up call is an ungodly hour for a rock and roller such as Plaskett. Now at a point where he has buried himself in the hearts of Canadians, he’s free to play only large theatres, but refuses to give up on his fans in the smaller corners of the country. “I guess when you play some of the smaller places, they’re not spoiled from so many shows. So they’re really pumped. What I find is that people travel a lot more now to see the shows. If we show up in Peterborough and haven’t played in Toronto in a while, then a bunch of people commute from Toronto. What I’m really enjoying at this point in my career is the fact that there’s still places to play in Canada that I’ve never been too.”

Offering a counterpoint, he continues, “The thing I like about the soft seaters is the audience I have. I’ve got 10-year-olds and 65 year-olds getting into the records, plus a huge swath of people who are my age or in their twenties to forties. But I’m finding that when I play these soft seat venues everybody can come, and there’s always a tonne of Maritimers who inevitably have flasks and are hanging Nova Scotia flags from the balconies.”

Storytelling and songwriting has all but dissolved from the pop world. It’s sometimes now considered “classic” or even “hokey”, but Joel Plaskett can sway even the most contemporary critics of the style with his references to Husker Dü and Marillion, fitted effortlessly into a bookend of rhymes. “I’ve just always loved language. And I like rhymes and I like the challenge of rhyming weird stuff. Even in Thrush Hermit I rhymed ‘Panama City’ and ‘animosity’ and I was like ‘Yeah! I fuckin did that!’ I was proud of myself.” To find his lyrical voice, he’s studied the legendary tastemakers and developed his youthful take on them.

“Like, Neil Young can be vague, but he’s not vague. He’s still descriptive. Take After The Gold Rush. I don’t really know what he’s talking about, but he paints this picture and ‘Mother Nature’s on the run’ and you’re there. Meter is something that’s lost a little. I love hip-hop too for that kind of language bounce. That’s the thing that’s sometimes missing in rock and indie rock songwriting. There’s not much flow to language. There’s a lot of great music being made but I sometimes find that on a rhythmic vocal level, it’s just not that interesting to me. The places I find something interesting happening are in R&B and hip-hop. But I’m a serious white boy. I’m pretty square.”

With Scrappy Happiness behind him, Joel Plaskett has earned a day off. He relaxes deep into the leather sofa of his dressing room and stirs a dish of hummus with a carrot. The man has been a reliable live act and recording artist since his teenage years. With his nature being to give, he’s earned some sweet relief at the end of an electric night or when an album is finished. “I love when records are done and they hit the public.

That’s what was exciting, having that be a weekly thing.” Plaskett goes on to add poignantly; “There’s also these moments at the end of a tour, or a really important show where you step off and it’s in the rear view mirror. It’s done, and you’re drenched in sweat. There’s a lot of satisfaction in that moment. You’ve done your job and you can kick back and know that people have had a good time. That’s the best part of a gig, is feeling that sense of communication.” Message received. Zero distortion Joel.

he played a small show not to long ago in st thomas ontario(home to joe thornton of the san jose sharks, and jumbo the elephant). People couldnt believe he was coming to town and wow did he put on a show for a small 140 person crowd..was unreal. what a great performer but even better person.

There are pop stars, musicians and then there are artists. Joel is thoroughly an artist. I have known of him since he was 14, and like all artists, he is totally committed to following his muse- not crafting from formulas. This has allowed him to wander through many different musical landscapes - La De Da to Three is an incredible stretch. To each project he brings integrity, character and a sense of inspiration that makes hie music accessible and meaningful to the listener. May he live long and prosper.