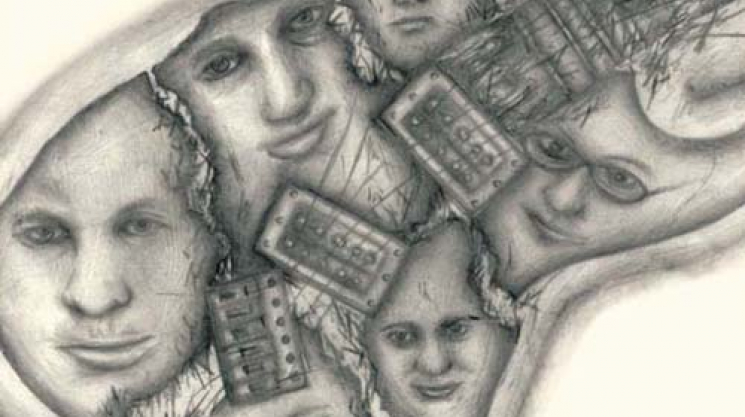 Everyone likes …And You Will Know Us by the Trail of Dead. If you like indie music, you like them. If you like metal, you like them. If you like radio-friendly music, you like them. So if everybody likes them, why aren’t they on North American FM airwaves? Sometimes those in charge have no clue as to how to market a band with potential and a massive following. If you’ve got a hammer, everything looks like a nail, and Trail of Dead are a white hot rivet, holding up a futuristic ivory tower full of music’s fist pumpers and noblemen. As the industry becomes more artist controlled and accessible, newer bands have a wealth of new starting point options while the bands that paved the new way have been fighting like Kimbo Slice to get out of contracts and direct their own cash flow and career path. According to their press release, Trail of Dead have “emancipated” from Interscope and have returned to the form of their hit album Source Tags and Codes. Sit down with frontman Conrad Keely and he will dispute the notion.

“This is the first press release that I didn’t write. Usually I write really cryptic and bizarre essays for our releases but our manager suggested we go with someone who’s a writer so we went with some writer from New York City and she put in a whole fucking ‘return to form’ thing, which I hate because I don’t think this is us returning to anything. We always forge ahead with what we do. I think that we’re still in some ways trying to achieve ideas that we were striving for on the first record. If we had the same budget for the last couple of records that we had for the first record they might have sounded a lot more similar. I also don’t think of Source Tags and Codes as a benchmark for me.”

Adding to the curiosity of new album, The Century of Self, being touted as something of a self-referencing, revisionist record, is the fact that this is the first …And You Will Know Us By The Trail of Dead album not recorded with Mike McCarthy. This time around, the band opted for the more forward-thinking Chris Coady (TV On The Radio, Cass McCombs, Yeah Yeah Yeahs).

“We fired our previous producer,” Conrad says, bluntly. “I hadn’t been listening to [Chris Coady] but I’d been hanging out with him as a friend and we shared a common interest in software synthesizers. And one thing for me that has always been important to Trail of Dead is really keeping abreast of technology and bringing into it everything that’s current with musical technology. That was something that we really diverged from with our previous producer who is a complete Luddite when it comes to music. He refuses to learn Pro Tools… Chris Coady was someone who could sit down and talk to me about native instrument software…and I knew that was going to be something really important to me with recording this record and something that I was trying to do. So he was the logical choice. And plus, we were just friends at this point.”

It appears that as the world of recorded music becomes dominated by younger people and records are viewed less as property, artists are choosing to opt out of contracts with major labels and moving towards narrowcasting to more appropriate audiences, thus bypassing the need for record men to do all the work and take all the cheddar. The byproducts of this practice are the rumours that start about bad blood between the parties. Are Trail of Dead archrivals with Interscope now?

“Let me dispel that”, begins Conrad. “I don’t feel bitter towards Interscope at all. I think they did a great job at putting us out and signing us in the first place. They just did a really bad job at promoting the last two records. I have no problems with the last two records, in fact they’re two of my favourite records we’ve ever done, especially the last one because for me it represented total freedom. Interscope never controlled anything we ever did artistically. We had complete freedom. What they failed to do was promote us because they didn’t know how to market what we were doing,.. We made a studio record that was one hundred percent for our own personal satisfaction, and the consequences for that were that it had a very mixed reception from our fans. But I don’t’ regret it. We learned a lot and we did exactly what we wanted to. No one stood in our way… We left Interscope because of the way they handled money. It’s just the whole idea that a corporation’s thinking that these are still the same times we lived in 10 years ago when economies were great and you could just throw money carelessly around. We are living in these more frugal times where artists should be in more control of how their money is spent. I used to think of labels as banks that you don’t pay back, but now I realize that your career’s an investment and these people might be putting up money like a bank is putting up money for a mortgage for your house, but if you’re gonna invest it poorly or not be advised on how to invest it then you’re not going to see any returns from that.”

So you’re in a young band, and you wanna be huge. Listen to Conrad Keely’s advice: “If you’re a band that’s going to write mainstream pop music, absolutely sign to a major label—you’ll probably become a millionaire. But if you’re a band that’s going to be a purely artistic pursuit that is not interested in writing top 40 hits and are going to play the game purely by your own rules then you might consider being an independent artist.” Good answer.