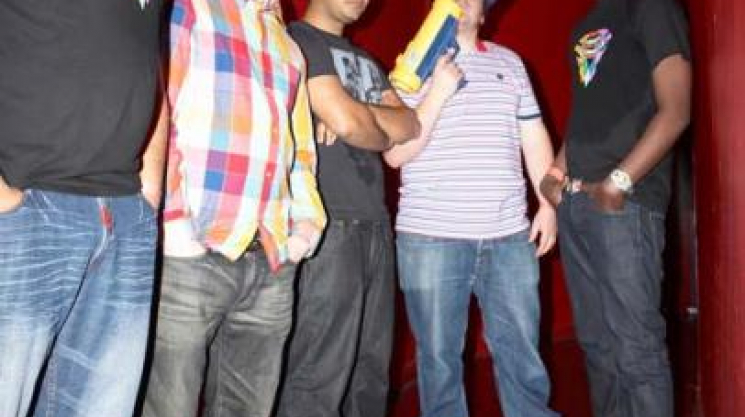 Rolling African plains, herds of galloping Zebras heading towards a watering hole, chants of the Massai in the distance. What does this have to do with Buraka Som Sistema? Absolutely nothing. Buraka Som Sistema are the first wave of Kuduro producers to gain worldwide notoriety. Hailing from Lisbon and Angola, the foursome have picked up some loyal and high profile followers like Diplo, Switch, Hot Chip and M.I.A. who count themselves among the legion of BSS fans.

MTV Europe Award nomination… CHECK!
Acclaim from a number of highly regarded music magazines …CHECK!
A live show that you have to see to believe… CHECK!

With all this critical praise, the question has to be asked: what the hell is Kuduro anyways? First off, let’s get one thing straight: Kuduro is not what one would traditionally define as “World Music.” You wont find Kuduro playing at Starbucks while ordering your daily latte. Kuduro was born out of the ghettos of Angola with roots in the late Eighties. Producers based out of Luanda, Angola’s capital city, heavily influenced by American- and European-based electronic music, started incorporating new sounds and techniques into their tribal African percussion-driven beats, creating music known as Batinda. Now different people will tell you two different stories of how Kuduro came to be. One group will say it began with a guy name Sebem who started rapping over Batinda—many credit him with starting the genre. A second group of people will tell you Kuduro, which means “hard bottom” in Portuguese (Angola’s national language), came from the name of a dance that people were doing to this music. Either way the genre was born and people were dancing. As Angolans started to immigrate to Portugal, their music did too. Which is how Kuduro made it to Europe.

Thanks in part to Buraka Som Sistema, the sounds of Kuduro have been disseminated to hard drives of tastemakers worldwide. But who are the people behind this production crew? According to one of the group’s MCs, Kalaf, the crew consists of him, Riot, Lil John (not Lil’ Jon), and Conductor. The crew started to form when Lil John and Riot were in high school together. They played in a series of bands but got tired of practice, so they “decided to pick up some second-hand samples and jump into the production of electronic music.” Kalaf came into the picture through a series of collaborations. From this, the trio decided to start a record label called Enchufada and they linked up with Conductor who was making similar music. The group was born.

BSS cut their teeth on a series of club nights they threw, “which later became the foundation of Buraka Som Sistema,” Kalaf says. “On those nights we had a bunch of dancers and MCs jumping on stage and rocking with us. Our parties were gaining notoriety for being totally off the hook. It was a reflection of the rising Lisbon music scene.” It was at one of these parties that they realized how big Kuduro could be. “A few years ago, back in 2005, we did some huge crazy parties with all the artists of our label, Enchufada. One at Lux in Lisbon and the other one at Casa da Musica in Porto. We finished both events with a huge sound system—loads of people up on stage going for it. At that time we already had some Kuduro re-edits and when we dropped those tunes people went mental. After a few months the club shut down but there was a strong demand for continuation of those nights, that’s when we decided to form the group and start touring.”

The name Buraka Som Sistema came about in a very similar manner. At one of these parties ”we started rhyming off the names of Lisbon suburbs to make connections for people and the music. I think Lil John was on the mic at that moment and he said ‘This is the sound from Buraca’—one of the 11 areas of Amadora, which is the fourth most populated city in Portugal, and where Lil John and Riot grew up. Buraca is mainly known for the high number of African immigrants living in that area. Next day, all the party reviews in the newspapers mentioned the fact that we brought the music of the suburbs to the biggest stages in Portugal. After that, we decided to pick up one of those city names and we ended up taking Buraka because it sounded the coolest, and from those 11 areas of Amadora, it’s the one with the worst reputation.”

So what strategy do they plan on using to prevent Kuduro from going the way of other highly anticipated upcoming music genres before it? “The only plan we have is to keep making good music. We cannot control what people want to hear. That was the idea behind this project since the very beginning and we believe it won’t change. Kuduro will probably melt into one big genre, which is dance music. If in the future we listen someone from another part of the world picking up a Kuduro loop and mixing it with some other techno, dubstep, house or new kind of beats, that will keep Kuduro alive.”

With their first EP, Black Diamond, slated to drop in early April, the group is ready to take over the ghetto global funk game. The title track, “Sounds of Kuduro,” which features M.I.A. and Kuduro visionary Dj Znobia, has already been blowing up dance floors worldwide. Expect an album filled with tracks that are going to make you freak out in the club, with an intensity that can only be compared to being tasered eight times consecutively, or as MC Kalaf puts it “make people dance like hell, sweat like hell and scream like hell.