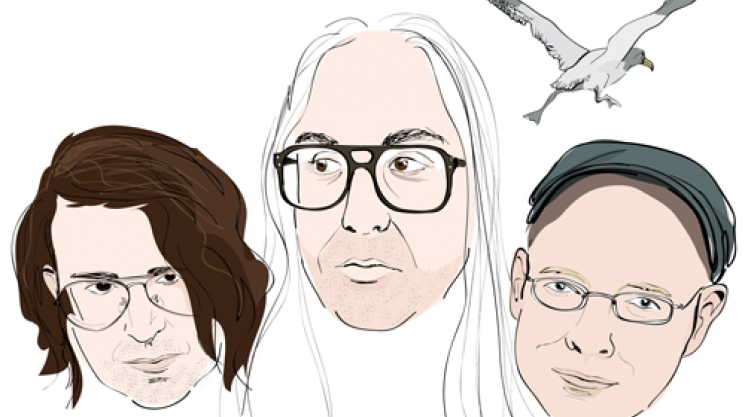 One way to understand the story of Dinosaur Jr. is to consider the way of the mighty albatross. They learn to fly together, but inevitably break apart, returning to their roots only when they’ve reached maturity. Sound familiar? The band’s bassist, Lou Barlow, declares, “I wouldn’t be in this band, I wouldn’t be working as Dinosaur Jr. right now if I hadn’t gotten better at picking my battles.”

The mysterious process of Dinosaur began in 1984. Together, the three warlocks of folk, metal and noise rock released three albums over four years: Dinosaur, You’re Living all Over Me and Bug. Despite the success of Bug in particular, creative differences prompted the dismissal of Barlow in 1988. While J and Murph moved forward, Lou brought his experience to other creative colonies such as Sebadoh and The Folk Implosion, returning home to Dinosaur in 2005, more the wise and less the wise-ass. “I just think that every situation has its idiosyncrasies and you have to kind of adjust. Sometimes I’ve really misjudged situations,” laughs Lou. “I don’t know if honesty is the best policy, but I’m always trying to figure that one out.”

Now, after nearly 20 years apart, the original lineup of J Mascis, Lou Barlow and Murph is back with a new album on Jagjaguwar. A classic Dina-sour stew of sludgy instrumentals, sweet melodies and some of the most perfect guitar riffs ever written, Farm is a faithful follow-up to last year’s reunion album, Beyond. “There’s a musical chemistry we have that’s just there,” says Lou. “When we got back together it immediately just snapped right back in. I mean J doesn’t really change paths between the Fog and Dinosaur. He’s been doing the same thing for years so when I see that kind of consistency I look at it and know exactly how I fit in.” But no matter how potent the chemistry, the key seems to be good ol’ fashioned polygamy, keeping a few pots simmering just in case. “I think just creatively it’s really important to work with other people,” says Lou. “Play other instruments and collaborate whenever you can; that’s necessary for me, and I mean it’s just healthy.”

One of the differences now is that everyone accepts that Dinosaur is, at the core, J’s deal. And while each individual has proven more than capable of going solo, they recognize the group’s power imbalance not as a case against staying together, but rather a requirement for it. Lou has never shied away from expressing the challenges of Dinosaur’s dynamic, which include his and J’s opposite approaches to work. “J’s very single-minded about his songwriting. I guess when I write I want to collaborate a little bit and that’s just more of a challenge I guess.” Out of the 10 new tracks, Lou wrote two: “Your Weather” and “Imagination Blind.” “I try to do something I haven’t really done,” boasts Lou. “Looking back on the stuff I’ve done there’s nothing with really layered vocals on it so I went for that approach in my songs. When it’s time to record, J comes in with the drums and guitar almost fully composed, and then Murph and I try to figure out what to play on it.” He explains, “J doesn’t write the vocals until the very end so I have to be extremely cautious and write bass lines that won’t interfere with whatever he MAY do on vocals later. It’s a pretty interesting way of working.” He laughs and adds, “It’s when the songs are done and we can hit the road, I get really into that, and so the live stuff is where I get my enjoyment from.”

To see Dinosaur Jr. live is the ultimate sensory overload. J’s long silver locks blow like curtains in the wind and his lackadaisical voice dribbles lyrics that are easy to grasp and hard to forget. While touring Beyond in 2007, they played for a packed Commodore Ballroom in Vancouver, the only show where I’ve been handed a pair of earplugs upon entry. “It’s a physical thing,” Lou declares. “So much of what we do is based on how it feels to us. When I first met J he used to play drums so when he switched to guitar he was on this path to find the right kind of amplification, a way to get that same kind of visceral feeling that you get with drums. J kind of set the bar like, ‘Okay this is gonna be really loud,’ so Murph and I kind of forged our style around that too, like trying to be heard, trying to be felt.”

When asked about music he’s into, Lou is as generous as can be with his likes and dislikes, always quick to shun the garbage and share the goods. “I got really into the Black Lips recently. They remind me a lot of the Sixties garage music I listen to anyway.” He pauses a while and adds, “I like the idea of these younger kids taking music and instead of totally imitating, they’re really loving it and bringing out songs that sound like they were recorded in 1966 but somehow totally modern.”

Aside from playing in Dinosaur Jr., Lou is releasing a solo album in August. “My best days on tour consist of playing acoustically in the day and then have a Dinosaur show at night. I really love having both close together; to me it’s so satisfying.” Lou adds, “Even when Sebadoh started I wanted to bring some of the aggression and volume of Dinosaur Jr. and mix it in with the more sort of intimate acoustic stuff.”

As for the future of Dinosaur Jr., Lou chuckles, “I see J on stage wearing bizarre coloured clothing, playing really loud lead guitar with a really horrible hat on. As far as Murph and I, we’re…I dunno. I’d love to just go out and play for 100 people, have everybody tell me how great I am and then go to another town and play for 50 more people, then home to bed and do it again. To do that with my kids in tow, that’d be alright… yeah, that’d be fantastic.”