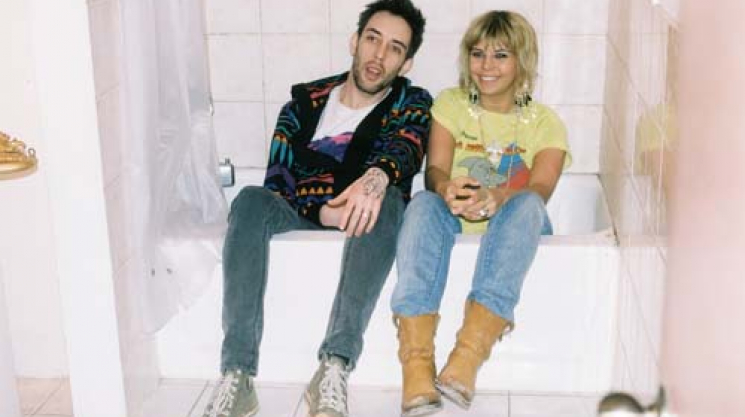 “The way this record is presented is more honest as what we are as a band,” says Dan Boeckner of The Handsome Furs’ latest album Face Control. Dan, who also co-fronts Wolf Parade, and music/life partner Alexei Perry’s personas and music stand out from their indie-rock comrades. Face Control, their follow-up to 2007’s Plague Park, is a brusque force. Their inspiration, drawn from Russian techno and their travels across Eastern Europe is evident in every aspect of Face Control.

“I really only feel totally alive when I’m either playing music or traveling,” states Dan. “With this record, writing about Eastern Europe, and this more emotional reportage of my emotional state while I was there and then working in some political observation—it’s easier for me to do that than to lock myself in a closet and be precious about my art and try to construct some fantasy. I need some kind of stimulus to make something.”

While creating Face Control, the Handsome Furs were wholly certain of the direction they desired their sophomore album to take. “We wanted to make it more like a live show,” explains Alexei. “We sort of figured out how to play our instruments and how to play together for Plague Park, and then we did a lot of touring and realized we liked things to be a little louder and a little more aggressive and a little more dancey.”

“Not to denigrate Plague Park,” begins Dan, “I mean I love the way that record sounds, but by the time we started touring Plague Park, sonically the band was so different than how we recorded it, that, actually, the record didn’t make sense to me as a representation of the live band. As we were writing sounds for this one, I wanted it to be more of a representation of what we were like live… I’ve played enough shows with this band and with Wolf Parade to know that it takes the indie-rock kids a little more. If you’re Justice or Daft Punk you’re going to get a bunch of kids in their early 20’s high as balls off of coke and ecstasy.”

Face Control is rock ‘n’ roll at its finest with a mélange of brooding reflection and a confident prowess to lure you in. This is an autobiography of what the Handsome Furs experienced while writing their album—right down to their personal photographs of their journey in the CD jacket. “What was really important for me as a kid was getting some sense of the human behind the music that I loved,” reflects Alexei. “So for things like the album art and having pictures in there, even if it was mundane events in our lives, meant a lot to me as a kid looking at photos of the people that I really loved and wanted to get to know and feel some kind of kinship with. I wanted to do that. If you can take down any barriers you have control over I think you should.”

Knocking down barriers is something the band has had to do since their first album. “We’re finally a band and getting out of the shadows of the first record and being the ‘side project’ of Wolf Parade,” says Alexei. “We don’t have those constrictions to work with. I don’t feel that anymore.”

The Handsome Furs understand music and their approach to Face Control speaks volumes about the band’s confidence. “Musically, it’s like ‘fuck it’, layer on the white noise,” laughs Dan. “It felt really liberating to make a record like that. I just felt like we could do whatever we wanted.” “It just felt really intensely like ourselves doing this,” adds Alexei. “I think when you don’t have anything to prove, it’s when you prove yourself more.”