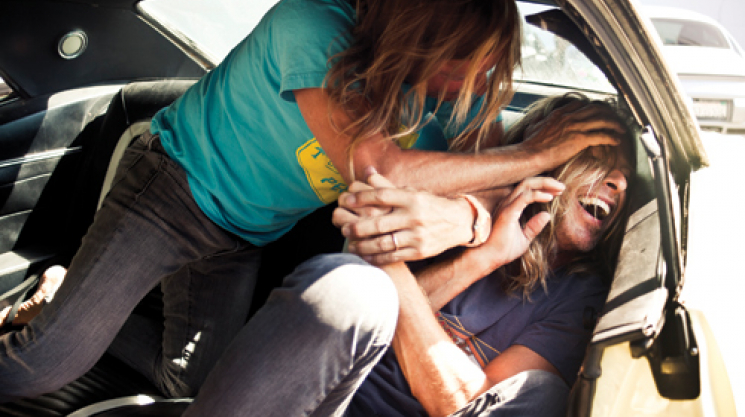 A name is important. Just like a good pair of jeans and a great haircut. They all have the potential to make you a star, or vice versa.

Case study: Chip and Pepper Foster, names with star power. So much so that I was convinced they couldn’t be real until I did my research, which consisted of watching any and all of their youtube videos and realized their success was inevitable; a perfect symbiotic relationship between name, person and star potential.

And did I mention they are twins? There is not one, but two of them. Identical twins with perfectly neglected, shaggy blond locks, blue eyes and enough energy to kill a moving horse.

In everything they do, they exude a genuine, passionate, infantile excitement and exuberance. It makes one wonder how these clothing designers have managed to build a multi-million dollar enterprise while staying so damn cool, and (let’s face it) adolescent. It came as no surprise when Chip offered this explanation: “We puke first, check each other’s pockets for cash, then head to Tim Horton’s for a double double.” Coming from these two, what surprised me most was where they were headed; Tim Horton’s. Seemingly insignificant, it says everything about who they are: two guys who have made their livelihood from capitalizing on the California culture, who call Malibu home, yet who remain distinctly Canadian and proud of it. With Canadian wives and children lucky enough to be carrying two passports, they make regular visits to Canada, specifically Lake of the Woods, where they do everything Canadian – beer-drinking, lake-swimming, wake-surfing, helicopter-flying, followed by more beer-drinking.

With the recent launch of their new Wet Wear line, Chip and Pepper are celebrating the past while looking to the future. They have brought back their original sunglasses-wearing bulldog and put him on modern fitting t-shirts, tank tops and hoodies in new light-weight fabrics. How did they come up with the idea for the bulldog? They first toyed with the idea of two gorillas, then two sharks, and finally a joint-smoking crab. In the end, the bulldog was the best fit. “The dog is a mix of good and bad. And a bulldog with shades is just super badass.” Only a year shy of their 25th anniversary in business, Chip and Pepper are proud to know their bulldog is a pop culture icon, right next to the Campbell’s soup can. To what do they attribute their success? “We basically try to do everything to the best of our ability and develop strategic partnerships.” This is true of the recent Wet Wear line that launched in conjunction with S3 stores across Canada and is promoted by their new skate team based in Venice Beach, California. They add, “We want things to be organic and develop naturally – just catch the wave,” a fitting analogy coming from a surfer who makes clothes for surfers.

It doesn’t hurt that they have all the right people wearing their Chip and Pepper denim line either. Their work has been all over the hottest bodies in Hollywood, from Beyonce, Rachel Bilson, and Sandra Bullock to Josh Duhamel and Gisele Bundchen. Then there was that one time when they ran into their friend Tommy Hilfiger – a king of denim – actually wearing their jeans! All Chip and Pepper can say of the experience is “Amazing!” When they met him again for lunch, he asked them to make jeans for his son. No big deal.

Then there was the time Pepper was in a restaurant with his wife and they saw Sandra Bullock wearing Chip and Pepper denim. Never one to shy away from an opportunity, he felt he should honour this celebrity’s brand loyalty with an explicit insult fitting for a cheating ex-husband. His wife quickly shushed him, stepping in to ask if she liked her Chip and Pepper jeans, to which Bullock exclaimed, “Oh, I LOVE my Chip and Peppers!” Although Chip and Pepper continue to look for success, they think it’s a good sign everyone from power couple Beyonce and Jay-Z to all the cool kids (the real skaters, surfers and boarders) are wearing their clothes. “It’s the Chip and Pepper movement.”

The tandem, who hail from Winnipeg, Canada, started their business in 1983, selling their t-shirts out of the back of a van. In ‘87, they came out with their first clothing line entitled Wet Wear, and then started chipping away at the denim industry in ‘89. Beyond designing, they are also known for their charity work, hosting a cartoon show, playing games of celebrity hockey, hosting TV style segments, playing cartoon characters (bulldogs dressed as humans, naturally) and singing songs about their brand (most notably, “Chip and Pepper Get Hip or Get Out”). I was even privy to a solo concert via Skype.

So what’s next for Chip and Pepper? Besides world domination through denim and sportswear, they’re about to begin shooting a docudrama entitled 8 Days with Chip and Pepper, and, they tell me none of it is staged – only their house is cleaner than usual and everything from their garage is now on their driveway; a list that looks something like this: cars, vintage denim, caribou, and Hawaiian chandeliers.

In case you still haven’t got a grip on just how cool Chip and Pepper really are, you should know they wrote a letter to Paris Hilton (a friend) while she was in jail offering her premium denim in which to greet fans, friends and foes after her stint behind bars. And yes, she replied. She wanted the jeans.

So what’s the next step for Chip and Pepper? Getting Obama into their jeans, obviously!