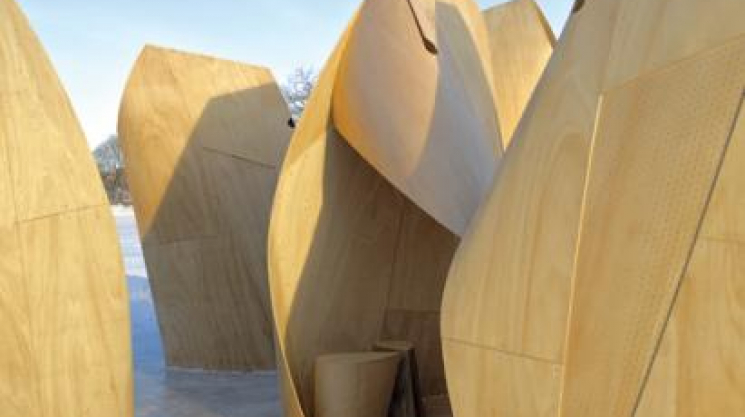 With 600,000 residents, Winnipeg is the coldest city in the world of its size outside Siberia. Yikes. Rather than shy away from the freezing temperature, Jordan Ardanaz realizes it makes sense to celebrate it, make the most of the elements and get creative.

Being in Winnipeg during its six-month long winter is not for the faint at heart. When the wind-chill hits -40 C, I don’t care who you are; you’re going to bitch about it. It’s gets so cold in fact, that during these months, a reasonable form of getting around the city is to skate along the frozen Red and Assiniboine Rivers that converge at its centre.

While this seems like a pretty great concept and a good excuse for exercise, let’s be honest, if you’re like me, you turn into a moaning little baby as soon as your fingertips go numb. Enter the concept of the skating shelter: a small hut that, when the going gets rough, you can bunker inside of until the feeling returns to your toes and you can continue your journey on to the liquor store for some belly-warmers.

Born out of a practical need for shelter from winter’s intense elements, Vancouver-based Patkau Architects have designed an instillation of skating shelters that gracefully ride the line between art and function, at the meeting point of the city’s two rivers.

The multi award winning 30-year old firm, recognized for their innovative architecture and design projects, shows artistry in creating designs that consider the relationship between the artificial and the phenomenal. One of their previous projects includes an otherworldly linear house on Salt Spring Island, which blends with its environment in a way that makes it almost invisible against the landscape, and gives inhabitants a view as if they were in a private gallery made of trees, ocean and sky.

Patkau’s Winnipeg skating shelters are an extension of this refined taste for naturalism in urban design. Made from timber and plywood, the shelters are formed into strange aerodynamic shapes that rest lonely at the confluence of the frozen Red and Assiniboine Rivers. Huddled together and buried into the ice like a group of old men at a fishing hole.

Carefully grouped into three pairs, the skating shelters create a communal space between them, that, when blasted by the frigid wind, creates a sort of microclimate that changes depending on the outside conditions. Each structure is “delicate and alive,” states Patkau, and is meant to gently sway with the winds, making those inside, “supremely aware of the inevitability, ferocity and beauty of winter on the Canadian prairies.” Or at the very least, skimming away some of the banality and harshness of their daily commutes.

They look almost alien in their surrounding environment, and conjure a sense of isolation when seen from a distance. However, the inherent community of the skating shelters’ arrangement is a reminder of the human need for companionship, in spite of the hostile throes of the Canadian winter.

These pieces of functional art are tied to and enhance the idea that we bond through the unfortunately well-known experience of being cold: we’re all freezing our asses off, better to do it together. And with this take on naturalism in the Winnipeg urban landscape, Patkau is reminding us of our place as intruders in the slipstream of the elements, meant to co-exist with our surrounding environment. To see more on Patkau go to patkau.ca