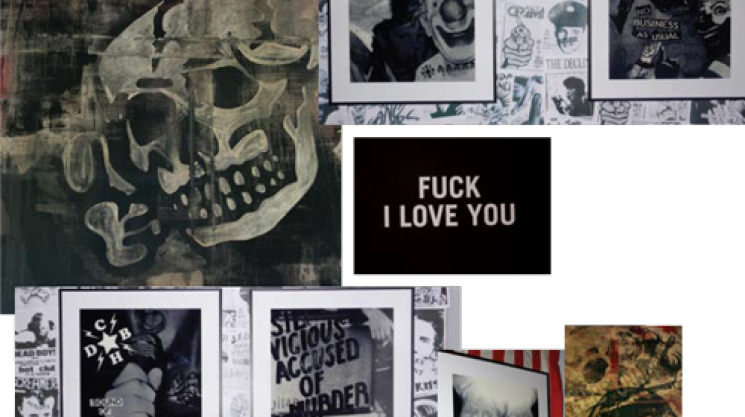 Raif Adelberg’s body is covered in tattoos but the cutest is of a peanut on his palm. It’s there as a reminder to never to let things slip through his hands. Darker by comparison, he has the Charles Manson quote “I can never be in love. Because I am love,” tattooed on the inside of his arm. It’s there because he finds Charlie very interesting. This is just one of many amusing contradictions surrounding this Vancouver artist/fashion designer.

Raif’s an internationally renowned fashion designer responsible for Richard Kidd, Naked and Deadboys Clubhouse. Yet he calls Vancouver his home and good luck finding a store in Canada that carries his lines (“I love Canada. It’s just people never approach me. I’m not hiding.”) He’s Jewish but his art incorporates SS skulls and swastikas (“Look beyond what the fucking Nazis did with this stuff. It’s very attractive. It’s very appealing. For a skull and crossbones, who’s gonna say that looks horrible?”) And aside from fashion designer and artist, he’s worn many others hats over the past decade in this city: store owner, gallerist, restaurateur and magazine publisher. However, in every photo he shows me of himself during this time, he’s always wearing the same cheap Thrasher skateboard magazine hat.

We’re sitting down and drinking cans of Pabst Blue Ribbon at his studio in the Downtown Eastside. Breaking the ice, I ask what a typical day is like in the gorgeous and sprawling workspace. “There isn’t one. It’s kinda like the Nutty Professor around here,” he half-jokes, but is quick to add, “It doesn’t seem like work if you enjoy doing it. At the end of the day, all this stuff is smoke and mirrors,” he says, motioning to his surroundings. “It’s more about creating something and having a good time.” Our discussion shifts to art and I tell him that I recently bought a painting by Michel Gondry for $20 and collect art prints. He tells me that he recently bought a Picasso and collects original Vivienne Westwood seditionary shirts. Punk fashion queen Westwood serves as a nice transition as we’re here to talk about his punk-themed art and fashion. Recently, Raif did a one night only art show in Vancouver called Deadboys Clubhouse. “It was an idea as kind of an environmental space that would pop up around the world and create this incestuous gang,” he explains. “It may show up in Paris. It may show up in New York, Vancouver, Calgary, Prince Albert. It doesn’t really matter. It’s just about creating this little circus, but on a punk tip.”

For the show, the normally sleek Red Bull Lounge was transformed into a punk rock flophouse with show flyers stapled everywhere. On the walls hung dirty hand-painted canvasses and glow-in-the-dark screenprint mashups of punk posters, tattoos, skinheads, musicians, artists, creepy clowns, Tijuana bible vixens, Disney characters, SS skulls and American flags. Also on display were the punk-as-fuck Deadboys Clubhouse shirts and leather jackets, all handmade and hand-ripped one-offs by Raif. The hardcore tunes blared loudly and the booze was free flowing, showing that this night was more about bringing people together than the filthy lucre.

Sure, Raif is covered head-to-toe in tattoos, he’s a fan of punk music and, yeah, he has a bit of a punk rock attitude (“I don’t care if Karl Lagerfeld is sucking my dick. Big fucking deal.”), but that’s not the story behind the show, the art and the Deadboys line. The real story behind his inspiration is this: there isn’t one. “Everything that I do is an extension of my personality. The passion and the inspiration comes from within me. The inspiration has to start within my head before anything happens. When people ask me ‘What’s the story behind this collection?’—honestly there is no story. It’s just kind of like someone handed me some plasticine and I just started making it. The biggest truth about the stuff I create comes from knowing me and my personality.”

Raif has personality to spare and some of it will end up rubbing off on you if you spend any time around the man. Yet with all he has going for him, he somehow manages to stay humble and keeps a low profile around town; work and self-promotion take a back seat to enjoying life with friends and family. This is probably why a lot of people assume that he’s a recluse. He says that’s not the case. “I love talking to people. I love seeing the inspiration of people coming up who are trying to do things. I don’t like seeing people who don’t think outside the box.”

Long after I’ve turned my recorder off, Raif turns to me and confesses, “I’d really like to be a motivational speaker.” Given the tattoos of the peanut and the quote by Charles Manson (who had no problems motivating people) somehow that’s not hard to imagine. He dispenses advice easily and offers up this: “Take a chance. Don’t worry if you’re gonna offend people. Do what’s in your heart. Do what’s in your head. Do what’s pure to you. When you close your eyes, what do you see? Well, create that.”