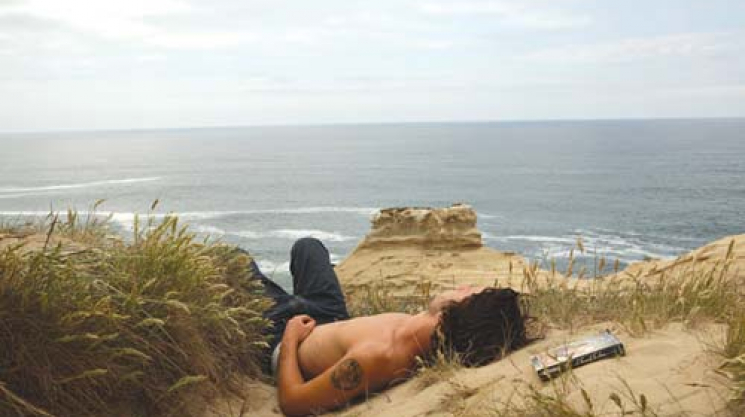 The secret to Salazar Motion Picture Collective’s triumphs may be cliché, but it’s honest: they’re driven by passion. The popularity of their narrative shorts (cleverly disguised as music videos and ad promos) is due not to fancy equipment, which they don’t have, or inflated budgets, which they haven’t been afforded—it lies in their eagerness to go anywhere to obtain the best shot possible. It is this commitment to outstanding location, built upon the sound structure of a creative and truly collaborative collective, which is the key to their well-earned success.Founded in 2008 by Nathan Drillot, Jesse Savath, Jeff Petry and Bienviendo Cruz, the group was banded as an initiative to up the ante of video production in Vancouver. Nathan explains the team was previously linked both socially and professionally, sharing a similar work ethic and a desire to depart from the “regimented mentality of film sets” to embark on an expedition that united their shared assets. They all have a background in photography, video, and/or art, which has lent immensely to aligning principles of composition and other visual aesthetics in their video work. You wouldn’t suspect a limited budget when examining Salazar’s reel; gauge the ripe footage and seamless editing paired with solid conceptual themes, and you’re likely to measure out a swanky client with a distended bank account. When questioned on how they could sustain such high production value using minimal shoot budgets provided by the small independent companies Salazar services, Nathan’s answer came back to the obvious. They simply do what most filmmakers won’t: put their egos aside, work un-clocked hours, and enthusiastically embark through any terrain necessary—be it Mexican jungles Fan Death—“Veronica’s Veil”), massive sand dunes, or icy glaciers (Lifetime Collective Spring/Summer and Fall/Winter 2010 video campaigns)—because they recognize that grand locations are key to a grand visual. Look at works like the “Wizard Smoke” skate video or “Old World Lies” music video for Brasstronaut, and you’ll recognize that the action is authentic, not reconstructed in post. Salazar has no aversion to CGI per se, but Nathan nails it when he points out that reality is magical when it’s captured on film. We recognize when time is taken to cultivate and capture real beauty; we have gut-wrenching respect for the Brasstronaut shoot that took three days on open ocean to complete. Visuals like these have instigated both word-of-mouth popularity and a viral following on the web. The Salazar family began with a brotherhood of filmmakers, but has expanded with every project they’ve taken on—a natural evolution when your production crew is small and your producer/client connection is genuine. Each video is built upon a relationship, not a contract. The complexity of Salazar’s work in just two short years has followed a steady incline, and the scope of their skill development shows no sign of plateauing. Ultimate goals for the Collective are to make feature-length narratives and documentaries, and for a crew who sees opportunity within obstacles, their success appears decided.